I have always been a stress/binge eater. Being in a difficult first marriage, having a challenging toddler and suffering from post natal depression with my second baby, I had plenty of stressful emotions to deal with during the early years when my weight problems began. I had no one to confide in or have girly chats with as we moved house frequently, so friendships were thin on the ground. My family didn't live close by so I'd find myself at home alone and an emotional wreck with 2 young children and trapped in a troublesome marriage. I turned to food as comfort and I would binge on whatever I could. My weight ballooned during both pregnancies but then it would go up and down afterwards depending on whether I was in a good or bad place. My eldest child was then diagnosed with Asperger's Syndrome and it all became too much for me to cope with, at my lowest point I wasn't sleeping and I was secretly binge eating on a more regular basis.

During my traumatic divorce and ensuing custody battle, I'd lose vast amounts of weight but then would binge again and each time I would become bigger and bigger. I soon joined the ranks of the obese.

I met my second husband, Richard, after moving back to where my family lived, he became my rock and he supported both myself and my children completely. Unfortunately, my sons autism was hard to deal with so life wasn't easy for us. I was involved in lots of meetings with Social Services and child psychologists plus I had to hold down a job. Amazingly, my husband stuck by my side, we were married and he helped me cope so we were able to both work and jointly share the childcare and looking after the house. I was promoted to manager in my job but with that came more responsibility and stress. I never felt well, I suffered from migraines, terrible gynaecological problems; which resulted in a urgent hysterectomy procedure and my weight was the last thing on my mind. Then, I was diagnosed with Osteoarthritis in my hips and lower spine at the age of 46! The pain was sometimes so bad that I couldn't walk properly or stand up straight. My Specialist was very blunt and told me in no uncertain terms that I was very fat and that unless I did something about it, the pain would always be there. He told me that I would need steroid injections into the affected joints which he suggested would need to be carried out regularly unless I lost weight and exercised. I had my first course of injections a few weeks later which were horrific!

I went home from hospital that day in a blur and all I remember is saying to my husband that I didn't want this life anymore. I was fed up of feeling ill and in pain, I was sick of being fat, stressed at work and mentally exhausted from years of emotional stress from my first marriage and subsequently my son! I thought my tears would never end that day but it marked the beginning of what was to become my new start and ultimately assist my recovery from depression and stress.

Going to a slimming club was a first step. That way I had admitted that I had a weight problem and wanted help. I tried several over the course of a couple of years but I couldn't cope with being weighed in a group and sitting round chatting about how our week had been and listening to people talking about how great their lives were when I felt so low in mine. Then after months of battling with myself, I took control. I didn't want to go through life hating myself for what somebody else had done to me. I had a new life with a great husband who was paying the price of a previous existence of mine.

The next challenge came after another bad morning with my son. Later that day he moved out and cut all contact with me. I was heartbroken but at the same time I knew that it was for the best for my family. It was a difficult time and although I have never fully recovered from it, I've learnt to live with it and had counselling to help me cope.

One positive thing my disastrous first marriage taught me was that I loved Spain, as my first husband's family were Spanish and I had spent a fair amount of time there with my children. I soon discovered that I shared my love of Spain with Richard so we would take short breaks and some longer holidays there when time and responsibilities permitted. I remember coming home from another bad day in the office and telling my very shocked husband that I wanted to sell our home and move to Spain. Effectively, I wanted to wipe the slate clean and start again, I wanted to live a happier, healthier life in my favourite Country. Amazingly he agreed! My daughter thought it was a fabulous idea and gave us her blessing. She had already decided to move to London where she was working.

We sold the house and took the biggest step and gave up our jobs, bought a house in the Costa Calida region and eventually moved on 1 August 2016. Being overweight in a hot country wasn't easy. I knew that I was the biggest I had ever been. I also knew deep down that it was the final battle that needed to be dealt with. I drew on what I had picked up at previous slimming groups and "surfed the net" to educate myself. Again it didn't really help me to lose weight but it stopped me gaining any further weight and I knew I had to find something or somebody to help! I wanted to find something that would help me lose weight faster than any conventional weight loss plans, as I found it difficult to keep focused by losing a pound or half a pound every few weeks. I found out about the Cambridge Weight Plan purely by glancing at a local magazine and I contacted my local consultant Mel. On the 17 October 2016, she came to my home, talked me through everything and helped me change my life. I liked the fact that there was no group weigh in and I liked the idea of meal replacements as well as real food. My first weigh in should have been depressing as I was very overweight, but at that point in my life it really wasn't. It was a starting point - not the finishing post! I love how I am now in control of my life and my eating habits. I like having food as well as the Cambridge products and seeing the scales moving every week. I have made losing weight a priority and everyday it is a mission. I want to achieve my goal of 11 Stone and nothing on this earth will stop me! It's the last piece of the puzzle you see. I have learnt the hard way that it's not what you want in life that matters, but how badly you want it, that determines whether or not you succeed in getting it. I have now lost over 5 stone and what a difference that has made. I look and feel like a different person! I no longer have pains in my joints, I can walk without being out of breath and I regularly take part in exercise classes. I am the happiest that I have ever been. Viva Cambridge Weight Plan! 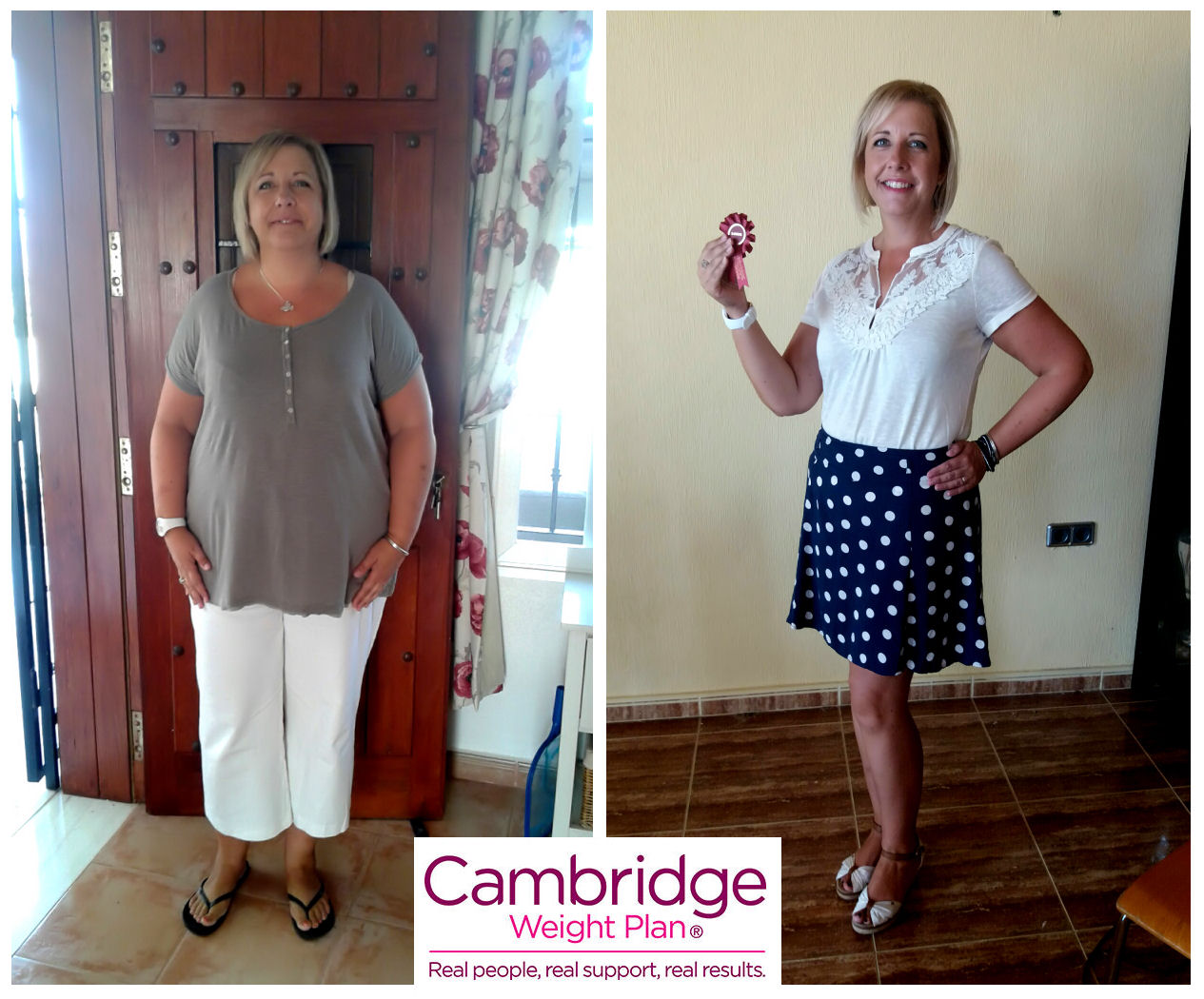 More people maintain weight loss with a supervisor
Our consultants provide a plan, products & advice every step of the way!

This email address is being protected from spambots. You need JavaScript enabled to view it.